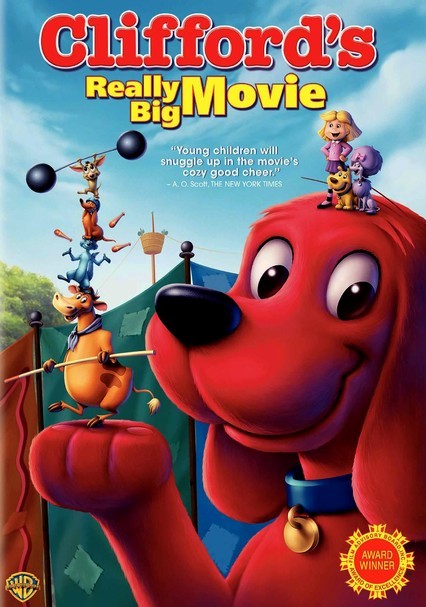 2004 G 1h 14m DVD
Colossal canine Clifford (voiced by the late John Ritter) lives with his wonderful owners, the Howard family, whom he loves. But soon, the lovable red dog wonders whether his oversized stature is becoming a burden on his family. Hoping to rid them of the responsibility, Clifford joins a traveling animal circus with his buddies Cleo (voiced by Cree Summer) and T-Bone (voiced by Kel Mitchell).

Parents need to know that in this full-length animated movie meant for very young kids, there are a few incidents in which misunderstanding, jealousy, and lying result in mild suspense and jeopardy to the main characters. Little kids may feel sad when Clifford the Big Red Dog and his buddies leave home, when Emily Elizabeth realizes that Clifford is missing, and when Clifford is captured and taken away. But worrisome events resolve quickly; the film has a happy ending; and characters who've misbehaved learn important lessons.

Some cartoon action, pratfalls, and close calls: a cow loses her balance on a tightrope; a smoking runaway car careens down a hillside; Clifford is captured and taken away; guards with nets and lasers chase the heroes through an amusement park. Several falls and bonks -- no one is injured.

Misunderstandings can happen and sometimes cause problems. It's better to talk things over than to jump to conclusions. Lying, even about little things, is never a good idea.

Clifford the Big Red Dog is a popular toy and programming franchise.