Close to You: Remembering the Carpenters 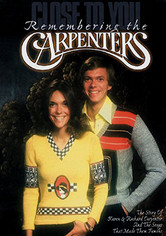 Close to You: Remembering the Carpenters

1997 NR 1h 40m DVD
With hits such as "Close to You," the Carpenters proved to be one of the most significant pop music acts of the 1970s. This documentary chronicles the brother-and-sister duo from their earliest high school performances to Karen's tragic death. Their story is told through interviews with such musical legends as Burt Bacharach and Herb Alpert, along with clips from their many television appearances.