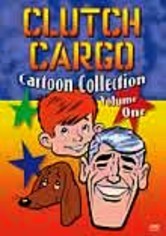 1959 NR 3h 45m DVD
Adventurer Clutch Cargo and his animated pals Spinner, Paddlefoot and Swampy are featured in this revolutionary series that was the first to use the Synchro-Vox animation system, which combined still animation cells with footage of live actors' mouths. Nine episodes of the innovative cartoon series are included here. Directed by Phil Booth, the series features the voices (and lips) of Richard Cotting, Margaret Kerry and Hal Smith.