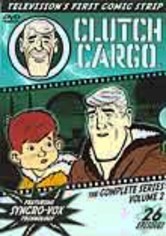 1959 NR 3 discs
"Clutch Cargo" was one of the most popular children's shows of the 1950s and pioneered the use of Synchro-vox technology (animation that superimposed real human lips over the mouths of cartoon drawings). The series, created by cartoonist Clark Haas, followed the globetrotting adventures of the titular pilot, his child companion, Spinner, and a dog named Paddlefoot. This video includes the last 26 episodes of the series' 52-episode run.