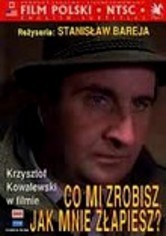 1978 NR 1h 38m DVD
Mirroring Poland's nonsensical political climate in the 1970s, this slapstick comedy follows the efforts of a troubled businessman (Krzysztof Kowalewski) to prove his wife's (Ewa Wisniewska) infidelity with incriminating photographs. Trouble is, she's never committed adultery. But since &NFihe&NFi_; has -- going so far as to accidentally impregnate another woman -- he decides to deflect the blame from himself and point the finger at his guiltless spouse.