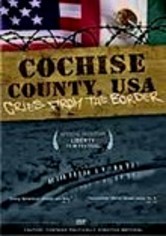 2006 NR 1h 9m DVD
Southwestern filmmaker Mercedes Maharis chronicles the immigration crisis in her native community of Cochise County, Ariz., home to 130,000 legal residents -- and more than 235,000 Mexican immigrants who came there illegally in 2004. Footage includes candid interviews with border patrol agents, civil rights activists, local officials and the immigrants themselves, as well as rare footage of actual border crossings in the region.