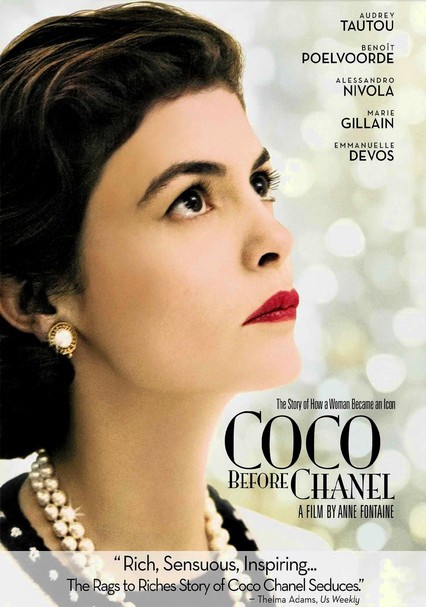 Parents need to know that this historical biopic depicting Coco Chanel's life before she hit it big as a fashion designer examines her somewhat scandalous love-life, in which she is kept by one man but is in love with another, both aware of the other. Her benefactor often treats her like chattel. Though she asserts her independence, she puts up with his disrespect, too. Nevertheless, Coco come across as an incredibly strong woman, a pioneer in many ways. There's a good bit of drinking and smoking, and some subtle love scenes. The movie is in French, with English subtitles.

Men and women flit from one partner to another. Some scenes showing them kissing and tussling in bed (no nudity). Frank conversations about what it's like to be a kept woman.

A man doesn't lay a finger on his mistress, but he does talk about her in a dominating, demeaning manner, making it clear she's like his property.

The film is in French, with English subtitles. No swearing in either language, though there is some subtle innuendo.

Coco never doubts her innate fashion sense, nor her ability to make it on her own terms at a time when women had few options other than depending on men. Her strength and fiery independence raise plenty of eyebrows, but she really doesn't care, and in the end is able to achieve her goals.

Not much, except toward the end when more of Coco Chanel's clothes and hats are on display.

Plenty of smoking and social drinking at parties, including a few balls that get quite bawdy and raucous. A few scenes take place in bars, with lots of drinking and suggestive behavior.