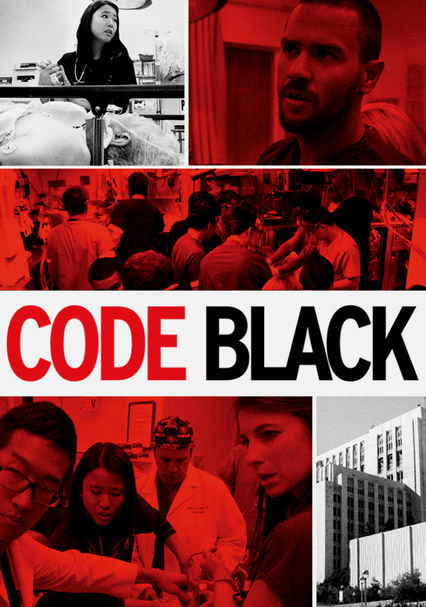 2013 NR 1h 28m DVD
Training an illuminating lens on a group of residents at Los Angeles County General Hospital, physician and filmmaker Ryan McGarry takes viewers inside the world of a public hospital -- his own -- for a close-up look at the ailing medical system.

Parents need to know that Code Black is an unflinching documentary about a group of resident doctors who work in the Los Angeles County Hospital's world-renowned emergency room. Although there's a smattering of strong language (the occasional "s--t" or "f--k"), what can really make the movie difficult to watch at times are the real-life scenes of bloody and extremely injured patients, a couple of whom die, despite the medical team's best efforts. There's some non-sexual nudity and a bit of social drinking as well. Teens interested in becoming doctors or nurses will be enlightened by the movie's position that the most challenging job in medicine might also arguably be the most rewarding.

Non-sexual nudity when patients are being treated.

The emergency room is a bloody, graphic place. Some of the patients the E.R. doctors see are victims of violence and are shown with multiple gun wounds and other major injuries. Some die. People are shown in varying degrees of undress, even completely nude while being worked on by the doctors. There's a lot of blood on the bodies, gurneys, and on the floor of the emergency room.

Code Black asserts that everyone should be entitled to healthcare, regardless of their socio-economic or citizenship status. The doctors stress that county hospitals aren't just for undocumented immigrants but for everyone: the working poor, the temporarily out of work, the fully insured who got sick nearby or wanted a world-class trauma center, etc. The doctors make it clear that they know they could be making more money working in private practice, but they feel their work -- as hard as it is -- is worthwhile since they're truly making a difference in the community.

The doctors are briefly shown drinking socially while out at dinner or at someone's house for a get-together.