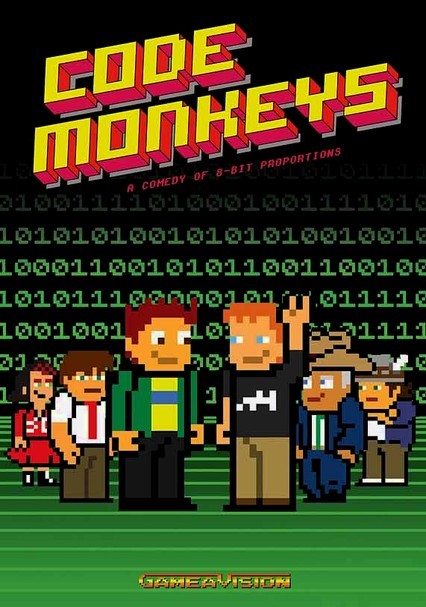 2007 TV-14 1 season
Designed in the style of an early-1980s video game, this outrageous animated series centers on the gonzo programmers at tech startup GameaVision and their antiheroic struggles to get their ideas off the ground. Stoner lead programmer Dave pursues every crackpot impulse, whether joining an underground eating competition or teaming up with pro wrestlers, while neatnik best bud Jerry meekly plays along, and scheming new boss Mr. Larrity cries foul.

Season 1 of this unique animated series from the G4 television network are included in this video collection that is animated in the tradition of a classic home game console and centers on the exploits of employees at a 1980s video game company. Many of the plot lines and much of the bawdy humor in the show are inspired by the premises of real-life vintage video games, such as "Super Mario Bros." and "Mike Tyson's Punch-Out!"

Parents need to know that this mature, video game-centric animated series features characters using marijuana and engaging in other risqué behaviors. There's strong sexual innuendo, including visual references to sadomasochism and partially clothed characters shown in sexually suggestive positions (though there's no actual nudity). Language includes words like "hell" and "p---y" (stronger words are bleeped), as well as racial/ethnic terms and stereotypes (for example, one character is called "Black Steve") and occasional iffy references to religion. While the animation may appeal to younger viewers, the show isn't intended for tweens and is even an iffy choice for teens.

References to guns, knives, killing, and murder. Mr. Larrity enjoys hunting men for sport. Weapons are occasionally seen, guns are shot, and corpses are dumped, but scenes of bloody carnage are minimal.

Audible language includes words like "hell" and "p---y" stronger words are bleeped out.

Lots of crude bathroom humor and racial and ethnic stereotypes. Occasional references to various religions, some of which border on offensive. Frequent references to homosexuality; at least one character is gay. Mr. Larrity's adopted son is Korean, "Black Steve" is African-American, and Mary is the only female programmer.

Lots of alcohol and drug references. Characters are shown drinking and getting high. Alcohol, bongs, marijuana plants, and other drug paraphernalia are visible.