Code of the Red Man 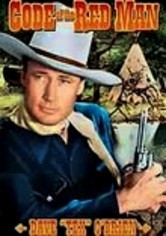 Code of the Red Man

1942 NR 1h 3m DVD
While a ferocious wild stallion terrorizes a frontier community, an evil horse rustler threatens an Indian village already besieged by settlers. It's up to two tribesmen and a benevolent cowboy to tame the horse and save the village. Chief Thundercloud, best known as Tonto in the Lone Ranger serials, stars in this unusual 1942 Western, told largely from the Native American perspective. The film was partly shot in scenic Monument Valley, Ariz.