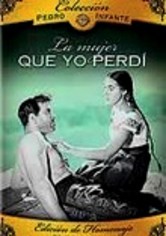 1949 NR 1h 25m DVD
Mexican singing star Pedro Infante stars in this politically charged black-and-white melodrama, the story of a fugitive revolutionary who sacrifices everything he has -- including the love of the beautiful Laura (Silvia Pinal) -- to defend his beloved country. The action unfolds as Infante is forced to go into hiding when he accidentally kills the son of a powerful attorney during a fight to defend Laura's honor.