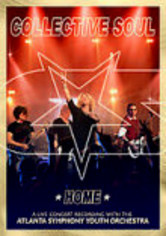 2005 NR 1h 35m DVD
Collective Soul returns to their roots in this memorable live concert recorded in the band's hometown of Atlanta in 2005. Performing alongside members of the Atlanta Symphony Youth Orchestra, the Georgia rockers play through a set list of classic tracks, including "Shine," "December," "The World I Know" and "Precious Declaration." Bonus materials include behind-the-scenes footage, never-before-released songs and a concert documentary.