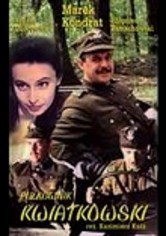 1995 NR 2h 3m DVD
The Soviets have occupied post-World War II Poland, prompting military surgeon Col. Kwiatkowski (Marek Kondrat) to disguise himself as a communist minister of internal affairs. The ruse works so well that he begins using it to save people from the enemy forces. Kazimierz Kutz directs this political satire, an entertaining cult classic that garnered two awards at the 1995 Polish Film Festival.