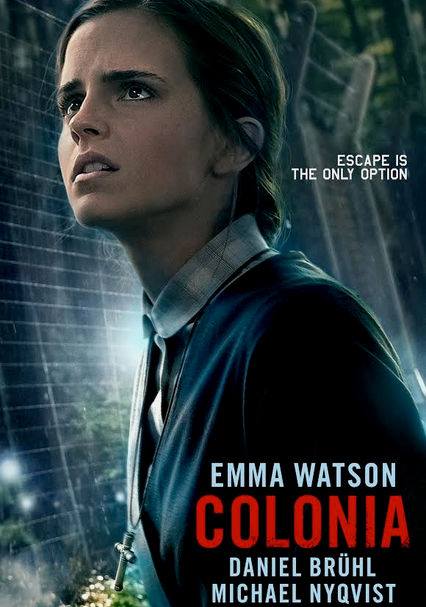 2016 R 1h 50m Blu-ray / DVD
After Lufthansa flight attendant Lena hooks up with her German beau in Santiago, Chile, their romantic rendezvous is cut short when he's snatched by the military police. Desperate to save him, Lena sets off on a mission that takes her far afield.

Parents need to know that Colonia starts out as a romance set against the impending overthrow of Salvador Allende's government in 1973 Chile and becomes the intense, lurid story of the main characters' imprisonment in a brutal religious cult. Based on the actual existence of Colonia Dignidad, a powerful fascist settlement in Chile that also served as a prison and torture chamber, the film loses its political perspective early on. Instead, it focuses on the characters' harsh fate at the merciless hands of a real-life ex-Nazi psychopath and his accomplices, who maintain order using violence (graphically depicted beatings and terrorizing), sexual humiliation, and cruelty. The violence is enhanced by name-calling and obscenities ("f--k," "slut," "c--t," "harlot," "s--t," and more) Killings and death are frequent; pedophilia is strongly alluded to.

A couple is shown in bed -- embracing, kissing, and after sex. Partial nudity.

Good triumphs over evil ... but not really.

Women in a cult are forced to take unidentified blue pills at bedtime. Some smoking.