Color of the Cross 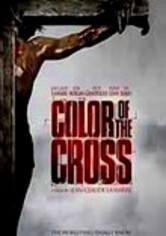 Color of the Cross

2006 PG-13 1h 28m DVD
In this reimagining of the last 48 hours of Jesus' life, director Jean-Claude La Marre (who also wrote the film and plays Jesus Christ) posits that the founder of Christianity was a black man, and that his crucifixion was racially motivated. Beginning with the Last Supper and ending with Christ's crucifixion, the film looks at the relationship between Jesus and his disciples and his family in the context of his final hours on earth.