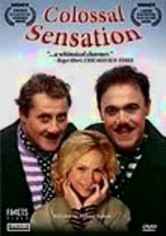 2004 NR 1h 35m DVD
Follow the trials and tribulations of twin brothers and circus clowns Dodo and Naftalin over five decades as they run afoul of the Hungarian Communist Party and blindly initiate the 1956 revolution in Budapest. This poignant dramedy from Hungarian visionary Robert Koltai (who also plays the role of Naftalin) sets key moments in history as the backdrop for the film, which also features an appearance by Czech director Jiri Menzel.