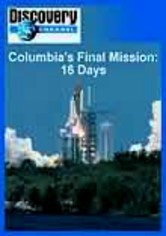 2004 NR 0h 50m DVD
NASA's space shuttle &NFiColumbia&NFi_; made its home on the outskirts of the atmosphere for more than 20 years before it finally retired. Take a rare glimpse inside the famous shuttle as it prepares for its last mission, along with the seven brave souls who helmed the craft through uncharted territory. Tag along as the crew carries out several scientific experiments while in space, and see what it takes to live in conditions of zero gravity.