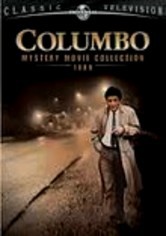 1989 NR 3h 7m DVD
Peter Falk reprises his Emmy-winning role as perpetually rumpled but brilliant detective Lt. Columbo in this pair of made-for-TV movies. Radio sex therapist Dr. Joan Allenby (Lindsay Crouse) becomes a suspect after her assistant winds up dead in Sex and the Married Detective; then, retired Army Col. Frank Brailie (Robert Foxworth), who heads a paramilitary organization, is not as upstanding as he appears in Grand Deceptions.