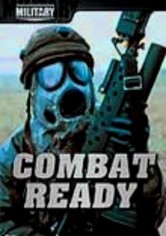 2007 NR 1h 29m DVD
This two-part program takes you behind the scenes as military personnel prepare for combat in Iraq and other wartime operations. From ancient board games to top secret computer simulations and re-creations of actual villages, U.S. troops ready themselves for battle in fascinating, and sometimes surprising, ways. Cameras capture all the action as soldiers practice combat maneuvers in the United States, Iraq and Germany.