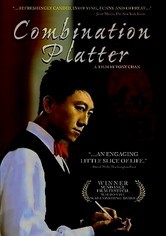 1993 NR 1h 24m DVD
Illegal immigrant Robert (Jeffrey Lau) works as a waiter in a Chinese restaurant and seeks a marriage of convenience with an American citizen so he can obtain a green card, all while struggling to preserve his cultural identity despite pressure to assimilate. Eventually, Robert meets a woman who may be willing to help him -- but he is flabbergasted at her ambivalence to his situation in this engaging indie film.