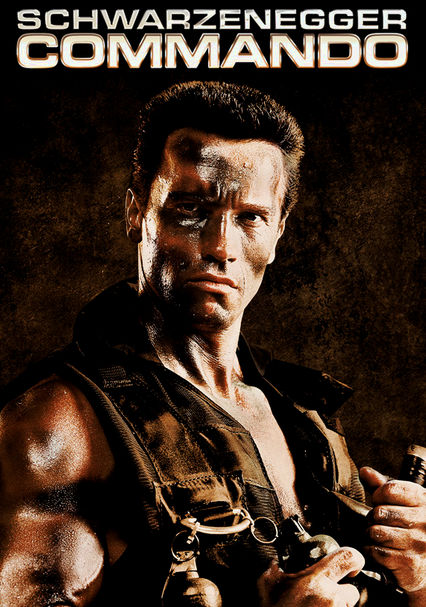 1985 R 1h 30m Blu-ray / DVD
Col. John Matrix (Arnold Schwarzenegger), the former leader of a special ops team, is vaulted back into action to save his young daughter (Alyssa Milano) who has been kidnapped. Her life is threatened lest John assassinate a South American president. Rather than being strong-armed into such a proposition, John takes matters (and lots of guns) into his owns hands as he fights through the jungle against his enemies to save his daughter.

Parents need to know that this action marathon has countless rounds of ammunition fired, some characters bloodily riddled with bullets, necks broken, one arm cut off, numerous stabbings/impalements, falls from lethal heights, ginormous fiery explosions, car crashes/rocket launches (sometimes in combination), etc. Real do-not-try-this-at-home moments include the main character leaping from an ascending airline to the ground and using buzz-saw blades as deadly Frisbees. Swearing is at R-level, with the hero dropping the F-bomb just like the other characters. Oh, and he lies when he promises one character he'll only kill him last. There's one quick, topless peek of woman in bed, part of a couple interrupted in motel sex.

Brief glimpse of a naked couple in bed when a motel-room door is broken town; bare breasts shown. The heroine pretends to be seducing a bad guy.

The f-word repeatedly (once uttered by the hero), the s-word, "ass."

Mainly the implied notions that Matrix is a devoted father, and the gung-ho vibe that one above-the-law guy with lots of firepower can take care of business, whereas police and legitimate military are useless.

Matrix invited to have a beer.