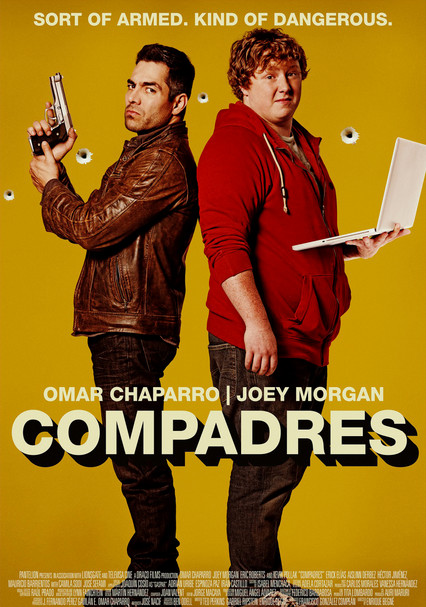 2016 R 1h 41m DVD
After his girlfriend is kidnapped and he's framed for a crime that he didn't commit, a former Mexican lawman must join forces with an American teenage hacker to track down the perpetrator.

Parents need to know that Compadres is a convoluted Mexican action comedy that centers on a disgraced cop looking for revenge on a crime lord. There's lots of violent action: Several people are shot to death, set on fire, and tortured. There's a shooting in a nursery, a baby plays with bullets, and a man threatens to shoot a pregnant woman in the stomach. Sexual content includes passionate making out and implied sex, as well as flirting and references to prostitution. Garza smokes, and several characters drink. The movie is primarily in Spanish with English subtitles (though occasionally in English with Spanish subtitles); swearing in both language includes "f--k" and "bitch."

A couple passionately makes out; sex is implied. The main characters flirt with others. A police officer slaps a woman's butt. A young woman says she wants to become a prostitute.

Violent scenes throughout the film. Several people are shot and killed, including innocent bystanders. Men are set on fire, stabbed, beaten to death, and tortured. A baby plays with bullets. Shoot-out in a hospital nursery.

Loyalty is a running theme. Garza is betrayed more than once, but he's loyal to his girlfriend, the memory of his dead partner, and, eventually, his protege.

In one scene, a group drinks Dos Equis Beer. A character drives an older Mercedes.

Garza smokes at the beginning of the movie but gives it up when his girlfriend says she won't kiss him again if he smokes. Garza throws out a cigarette that starts a fire; he then gives a boy a pack of cigarettes when the boy urinates on the fire, putting it out. Various characters drink in bars. A pregnant woman takes a drink of beer.