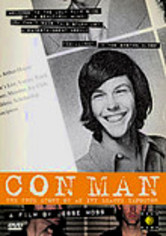 2006 NR 1h 33m DVD
This riveting documentary profiles James Hogue, the quintessential con man who finagled his way into the hallowed halls of Princeton University, where he made a name for himself as a scholar and a track star. But little did anyone know that he was a 31-year-old serial liar pretending to be a freshman -- and it wasn't the first time he pulled such a scam. Via time lines and interviews, the film tries to learn the truth about the inscrutable Hogue.