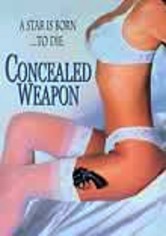 2004 R 1h 20m DVD
Up-and-coming actor Oliver Wright (Daryl Haney) is thrilled when he finds out he's landed a much-sought-after leading role working for a renowned producer. His happiness is dashed, however, when it appears that every actor in Hollywood will do almost anything to steal Oliver's desirable part from him. What ensues is a whirlwind of murder, burglary, mistaken identity and a mysterious, beautiful woman who's hiding a dark secret.