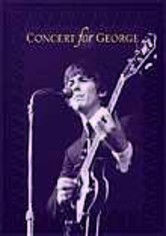 2003 PG-13 2 discs
Filmed in 2002 before a sold-out audience at London's Royal Albert Hall, this live concert is a joyous celebration of some of the most significant music of the 20th century, featuring stunning performances of songs by ex-Beatle George Harrison. The all-star lineup of this stirring tribute includes some of rock's most influential artists: Eric Clapton, Jeff Lynne, Paul McCartney, Tom Petty, Billy Preston, Ravi Shankar and Ringo Starr.