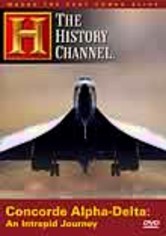 2004 NR 0h 50m DVD
One of the greatest aeronautical achievements of all time, the supersonic Concorde passenger jet flies at twice the speed of sound. This documentary chronicles the history of the Concorde from the plane's controversial development process to its limited use shuttling wealthy passengers on trans-Atlantic flights and the events that led to its decommission. Despite its problems, the Concorde remains a shining symbol of technological accomplishment.