Confessions of a Gangsta 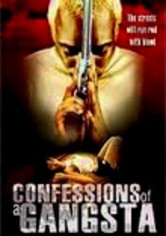 Confessions of a Gangsta

2006 NR 1h 26m DVD
In this urban drama, Jay -- the illegitimate offspring of New York City's mayor -- abducts and plans to kill his father as payback for leading Jay into a life of crime. As he holds the politician hostage in a Harlem basement, Jay recalls the chain of events that led to the kidnapping and wonders whether he has what it takes to knock off his old man. The film's cast includes Allen Aikens, Michelle Fenton and Shenna Garcia.