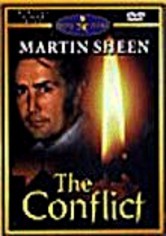 1973 NR 1h 18m DVD
The same year that Martin Sheen shot to stardom portraying a James Dean-style serial killer in Badlands, he also played a priest in this thoughtful drama set in the future. After the Catholic Church joins other Western religions in an ecumenical movement, Father Kinsella (Sheen) must go to Ireland to straighten out a band of monks who've defied the pope. The made-for-TV movie (originally titled The Catholics) also stars Trevor Howard.