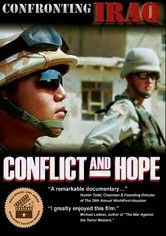 2005 NR 1h 26m DVD
Producer Roger Aronoff uses dramatic footage and interviews with a slew of talking heads to set the record straight on a number of issues surrounding the Iraq War. Former CIA director James Woolsey, journalist Stephen Hayes, former United Nations weapons inspector Tim Trevan and others provide insight into the big questions such as "Was the United States motivated by greed and politics, or is the confrontation a just and necessary war?"