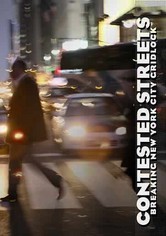 2006 NR 0h 57m DVD
Since the invention of the automobile, the streets of New York City have slowly been taken over by cars -- sacrificing what was once a beautifully conceived public space. This documentary looks at the history and future of the Big Apple's roadways. Through interviews and footage, the film explores how limiting vehicles in such cities as London, Copenhagen and Paris has resulted in vast environmental and social improvements.