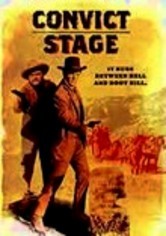 1965 NR 2h 22m DVD
Ben Lattimore (Harry Lauter) hits the trail on a mission of vengeance against the outlaws who murdered his sister in this 1960s Western. But Lattimore's journey is interrupted by Marshal Karnin (Don "Red" Barry), whose respect for the law may prevent Ben from completing his quest for justice. Jodi Mitchell and Hanna Landy co-star in this tale of frontier morality from prolific Western director Lesley Selander.