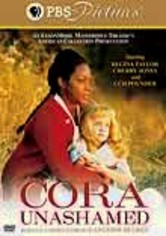 2000 NR 2h 0m DVD
An African-American housekeeper named Cora (Regina Taylor) -- the only black person in a small Iowa town -- must wage battle on two fronts against the looming Depression and the racism that prevails in her tiny farming community. Directed by Deborah M. Pratt and co-starring Cherry Jones and CCH Pounder, this powerful drama originally aired as a segment on PBS's "Masterpiece Theatre" and is adapted from a work by Langston Hughes.