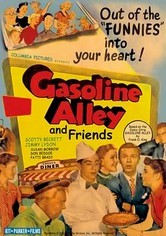 1951 NR 1h 2m DVD
Unwanted houseguest Elwood Martin (Gordon Jones) gives equally unwanted business advice to his cousin's husband, Corky Wallet (Scotty Beckett), and the rest of the Wallet clan in this feature version of the beloved Frank King comic strip. Also included is a double feature starring comic actor Sid Melton as a harried Hollywood cab driver in Stop That Cab and as an accidental Marine recruit in Leave It to the Marines.