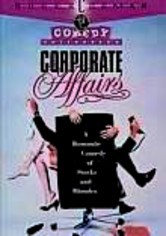 1990 R 1h 22m DVD
A group of Wall Street executives devise an outlandish scheme that will turn them into the power players of the financial world in this comedy. But pulling off the deal of the century won't be easy with a plan plagued by a twisted love affair between two bitter rivals (Peter Scolari and Mary Crosby), enormous egos, double-crossers -- and the boss's corpse. Chris Lemmon, Ken Kercheval and Lisa Moncure star.