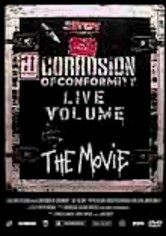 2001 NR 1h 15m DVD
Popular heavy-metal rockers Corrosion of Conformity built a dedicated fan base without the mainstream tools of radio play and heavy MTV rotation -- no small feat! This video captures the band at Detroit's Harpo Concert Theatre in April 2001. The concert is an assault on the senses that includes favorite tracks such as "Wiseblood," "Zippo," "Senor Limpio," "Vote with a Bullet" and other blistering tunes. Note: Contains explicit content.