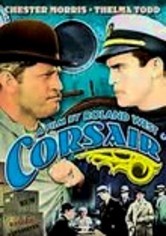 1934 NR 1h 15m DVD
Ex-college footballer John Hawkes (Chester Morris) sets out to prove he's as ruthless as his rich girlfriend's father when he reinvents himself as a Prohibition-era pirate. With his gun-toting crew, Hawkes sets sail on the yacht &NFiCorsair&NFi_; to seize the illegal booze of bad-guy bootlegger Big John (John Kohler). When one of Hawkes's spies is exposed, Big John vows to blow his upstart competitor out of the water in this twisting, high-seas melodrama.