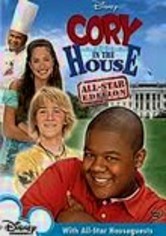 2007 TV-G 1h 28m DVD
Kyle Massey stars as Cory Baxter in this spinoff of Disney's "That's So Raven." When Cory's dad lands a job as the president's personal chef, father and son move into the White House, where Cory's soon mingling with Washington's movers and shakers. The new digs have their ups (sneaking aboard Air Force One) and their downs (the president's pesky daughter). Go behind the scenes for interviews with the teen star and his guests Raven and the Rock.

Parents need to know that this spin-off of the popular Disney series That's So Raven picks up the story as the Baxter men (dad Victor and son Cory) move into the White House, where Victor is to be the president's personal chef. The show continues the exaggerated comedy style of its parent program, often putting characters into ridiculously unlikely situations for laughs -- and its White House locale offers plenty of opportunity for that. There's little to worry parents of older kids and tweens, since the overall silliness trumps any questionable material, and strong messages about self-respect, honesty, and friendship abound.

Flirting is mild and usually doesn't include anything sexual.

Mild comedic peril (like being bucked from a horse); rarely causes anything but wincing and moaning.

Strong messages include lessons in self-respect, honesty, and friendship. Adult figures usually give good advice when prompted, but their influence isn't a strong force in kids' lives (there's more of an "aw, shucks" attitude when kids get into trouble). The multicultural cast includes African-American and Caucasian characters.

Cell phones are used on occasion.