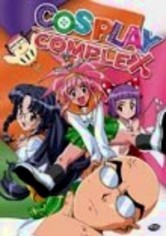 2004 NR 1h 15m DVD
Young Chako's East Oizuki Academy team has earned a sterling reputation in Japan, and she knows that they can also win the world championship. Only one thing stands in their way -- disinterest! The team doesn't have an adult sponsor and can't keep up enrollment. As a result, they must fight rivals, find new members (who want more than just to see the girls in the buff) and learn to change costumes … quickly.