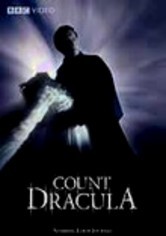 1977 NR 2h 30m DVD
Louis Jourdan takes the title role of this BBC adaptation of Bram Stoker's classic novel, a program that originally aired in the 1970s as a three-part miniseries. Upon arriving in Transylvania at the creepy castle of the mysterious Count Dracula, newly minted London solicitor Jonathan Harker (Bosco Hogan) begins to suspect ill of his host. Can he escape from the locked-down castle and make it back to his one true love (Susan Penhaligon)?