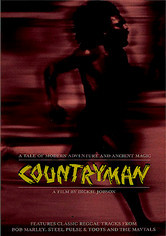 1982 R 1h 42m DVD
A peaceful Rastafarian fisherman in Jamaica becomes an unwitting pawn in a game of international political intrigue when an airplane crashes into a nearby swamp. Later, when violence breaks loose, he displays an almost magical ability in hand-to-hand combat. The reggae soundtrack includes Wally Badarou's "Obeah Man Dub," Bob Marley's "Natural Mystic," Human Cargo's "Carry Us Beyond" and many more.