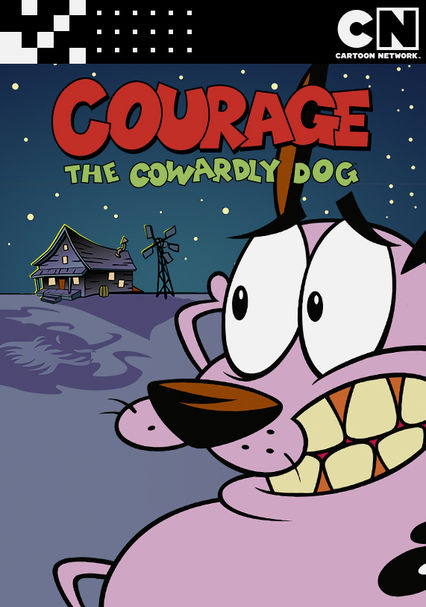 1999 NR 1 season
Adopted by sweet-natured Muriel, Courage the Cowardly Dog lives on a farm near a town called Nowhere, where he protects Muriel and her grumpy husband, Eustace, from monsters and other creepy creatures.

Perpetually frightened dog Courage struggles to survive his regular run-ins with terrifying creatures and demons like Bigfoot and the ghost of King Ramses. In Season 1, he faces a crazed cat, develops amnesia and becomes possessed.

Parents need to know that this show isn't appropriate for any child young enough to believe in the reality of a cartoon character on any level. Every episode begins with Courage's owner's husband behaving in a nasty, abusive way to his wife and dog, and overall the show is about as violent and gross as it's possible for animation to be (and not in the Bugs Bunny way that many parents feel is funny even to young kids). That said, it's all so extreme -- characters grow extra arms, turn inside out, etc. -- that it's next to impossible to take it seriously, even though it's also hard not to wince if you've got a young kid in front of the television when it comes on.

Very occasional references, such as "this is one of those naughty men's clubs, isn't it?" when a character is tied up.

All of the characters are subjected to extremely gross, graphic animated violence, including exploding organs, weapons of all sorts, growing extra limbs, turning inside out -- you name it. It's intended to be so over the top that it's funny, but it's still very strong for a cartoon.

"Courage" apparently has very little, although he always fights his cowardice and comes through for his owner. Another main character regularly tries to harm Courage, and all characters except two are prone to cruel remarks and behavior toward one another (to say the least).