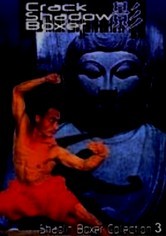 1979 NR 1h 30m DVD
Pai-san (Feng Ku) and Wu Long (Kwok Choi Hon) are con men mistaken for kung fu experts hired to protect a small town from a horde of baddies. But not only do the townsfolk think the bumbling men are an unstoppable force; the bad guys do, too. As the villains send for reinforcements for the big showdown, the two unlucky heroes must prepare for the fight of their miserable lives in this action-packed kung fu comedy.