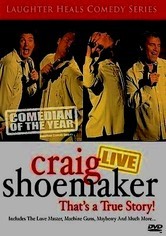 2004 NR 1h 26m DVD
Taped at the Improv in San Jose, Calif., this stand-up comedy performance features multitalented Craig Shoemaker, who has made countless television appearances, including "Comedy Central Presents," "Comic Relief" on HBO and the game show "Hollywood Squares." The writer, actor and comedian is probably best known for his "Love Master" skit, which is included in this release and was made into a feature film in 1997.