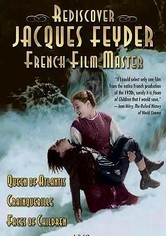 1922 NR 1h 16m DVD
This affecting silent film follows the title character, a street peddler unfairly jailed for a dubious crime. Released from prison, Crainquebille finds solace for his broken spirit in the friendship of a young orphan boy. Directed by Jacques Feyder, this touching tale of redemption was the first of three collaborations with child actor Jean Forest. The video boasts a beautiful restoration of the classic 1921 film, featuring a new orchestral score.