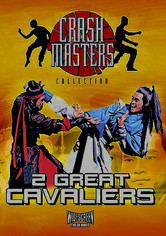 1978 NR 1h 40m DVD
In this fist-flying, high-kicking kung fu film, a Ming warrior (John Liu) seeks revenge on the heartless Manchurian gang killers who killed his fiancé. Able to hold her own in a fight, a Ming woman (Angela Mao Ying) becomes the target of the ruthless gang, who want possession of her list of rebel fighters. The two decide to team up and fight together against the Manchurians. Chen Sing, Leung Kar Yan, Man Kong Lung and Shut Chung Tin also star.