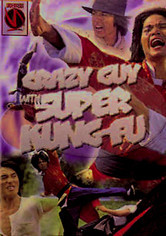 1978 NR 1h 22m DVD
Le I Min (aka Jackie Lee) heads a band of misfits called the 3 Donkeys. The gang runs into a kung fu master who forces them to learn the "super kung fu" style so they can fight against the ruthless killer known as Scarface. Seems others are on Scarface's trail too, and it's not long before the chase turns into a major battle of martial arts masters!