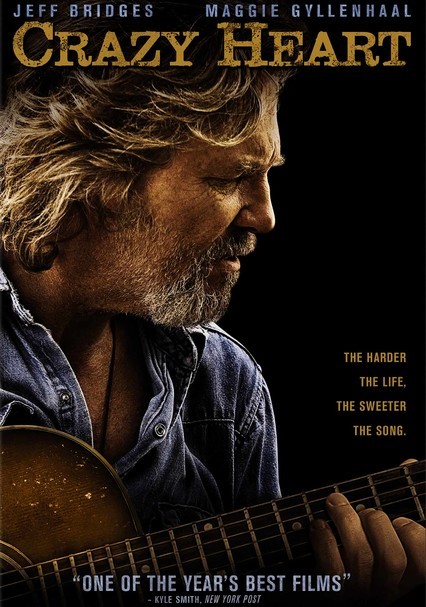 2009 R 1h 51m Blu-ray / DVD
When reporter Jean Craddock (Oscar nominee Maggie Gyllenhaal) interviews Bad Blake (Oscar winner Jeff Bridges) -- an alcoholic, seen-better-days country music legend -- they connect, and the hard-living crooner sees a possible saving grace in a life with Jean and her young son. But can he leave behind an existence playing in the shadow of Tommy (Colin Farrell), the upstart kid he once mentored? Robert Duvall produces and co-stars.

Parents need to know that Crazy Heart -- which follows a middle-aged musician's (Jeff Bridges) failing career and the major drinking problem that's contributing to that failure -- is clearly aimed at grown-ups. Unless teens have an interest in classic country music (or in actor Colin Farrell, who has a small supporting role), it's unlikely that they'll be clamoring to see it. In the event that they are, they'll find plenty of food for thought and some good music ... as well as some very strong language (especially during the movie's first half) and tons of drinking (including drunk driving), until the main character has an important wake-up call.

Jean and Bad do a lot of kissing -- open-mouthed and not shy. There are no sex scenes, but it's definitely suggested that they've slept together. They wake up in the same bed and are apparently naked under the covers (no real nudity is shown). Earlier in the film viewers see Bad leaving a groupie's bed; again, sex is suggested rather than shown. Another groupie openly flirts with Bad in a bar, suggesting a night of wild passion.

Some verbal uprisings from time to time -- mostly Jean (and sometimes others) confronting Bad about his drinking. But Bad rarely fights back and never lifts a finger against anyone.

Bad frequently uses the kind of language you might expect from a road-weary, drunken, veteran musician, including "f--k" and "f--kin'," "s--t," "ass," "goddamn," "Jesus Christ" (used as an exclamation), "hell," and the abbreviated "sumbitch." That said, the swearing grows less frequent as the movie goes on.

The movie isn't exactly a "feel-good drama," but it does have underlying positive messages. Bad starts out in a rut, his fame and glory faded, but eventually he finds the strength to strive toward something better, overcoming the problems that keep him down. He reaches rock bottom before climbing back up, but the movie celebrates his bravery and dedication.

The only real products seen are the various bottles of booze consumed by Bad, though none of it is deliberately or blatantly referred to by brand.

One of the movie's two main plotlines has to do with Bad's out-of-control drinking. He drinks constantly, mostly hard liquor, and he grows agitated (though never violent) if he can't get it. Viewers see him leaving the stage during a show to throw up in a garbage can; he throws up again later and passes out on his bathroom floor. He drives drunk, and he takes gulps of alcohol to stop his shaking hands. His wake-up call comes when his need for a drink endagers someone he cares about -- a turning point that ultimately leads him down the road to recovery.