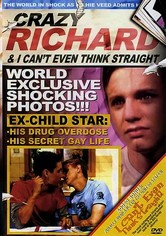 2002 NR 1h 24m DVD
Richard Veide used to be a child star, but after a drug overdose nearly killed him at age 13, he discovered that fame was fleeting. Now, in an attempt to make a comeback, he allows cameras to follow his every move in this parody of reality TV.