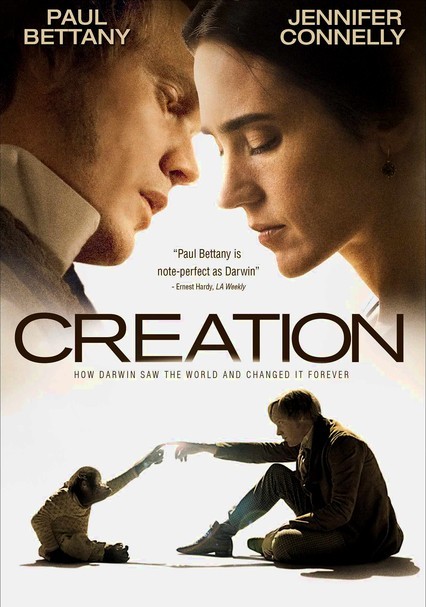 2009 PG-13 1h 48m DVD
Paul Bettany stars as Charles Darwin in this BBC biographical drama that captures the legendary scientist in a period of intense mourning -- and expansive intellectual discovery -- following the untimely death of his young daughter, Annie. As Darwin dares to question the existence of God, he pens his groundbreaking tome, On the Origin of Species -- much to the chagrin of his religious wife, Emma (Jennifer Connelly).

Parents need to know that this thought-provoking drama doesn't focus much on the nature of Charles Darwin's research but instead on the lengthy and overwrought process he undergoes to write his famous book, On the Origin of Species. Characters debate God and religion intensely and are torn apart by grief surrounding a child's death -- themes that might be too weighty for young teens and tweens. There's also some swearing (mostly words like "bulls--t") and brief scenes of non-sexual nudity.

Nothing suggestive or overt, but a man is shown naked in a makeshift shower (no genitalia visible). He and his wife discuss the fact that they're cousins who fell in love with each other.

A man feels tortured by his worries and work, causing him to hallucinate, which creates a menacing tone. Shots of fetuses floating in jars; a bird's neck is broken in the name of science. (Many bird carcasses, in fact, are shown in a lab.) The naked body of a teen dead from smallpox flashes across the screen. A fox attacks a rabbit.

A smattering of "goddammit" and "bulls--t."

The film celebrates people's right to disagree, even husbands and wives, as long as they're respectful of each other's views. It also applauds curiosity and hard work against all odds, plus the healing power of love.