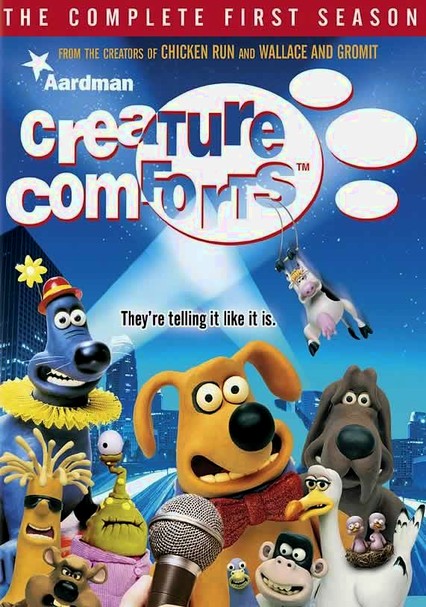 2004 TV-PG 2 seasons
Created by Nick Parks, who also originated the endearing and popular Wallace & Gromit series, this hilarious claymation show features animals discussing everyday topics such as love, sex and going to the gym. The clever blend of ordinary "man on the street" interview responses and animated creatures leads to a couple of pigs talking about their possessions, dogs discussing art while playing poker, a goldfish bemoaning her dry skin and much more.

Following the secret lives of animals via a hilarious mockumentary format, this animated series of shorts from Academy Award-winning director Nick Park (Wallace & Gromit, Chicken Run) features jaguars, gorillas and a veritable zoo of inhabitants -- who have many of the same problems that humans do. Originally created for British television and Comedy Central, "Creature Comforts" went on to win a BAFTA Award for Best Comedy Series in 2004.

From the creators of Wallace & Gromit comes this clever stop-motion animation series starring cute critters answering burning questions such as "What makes pigs feel sexy?" and "How do hamsters handle heartburn?" The whimsical show features a veritable zoo of creatures lip-syncing responses by everyday Brits during man-on-the-street interviews. Delivering answers in the second season are Clement the bloodhound, Fluffy the hamster and others.

Parents need to know that this hilarious show from the creator of the lovable Wallace and Gromit characters puts unscripted dialogue from the British public into the mouths of claymation animals, expounding on social topics like irksome neighbors, politics, and pet peeves. Families will find a lot to smile about here with great animation, virtually no iffy content, and some mild potty humor sure to please kids. The ironic quality of the comedy, based in dialogue paired with unusual orators (like hyenas whose interviews are disrupted over and over by giggling fits), will be lost on most kids, but they'll love the cute characters as much as parents will enjoy the show's superb wit.

Dialogue occasionally includes mild jokes made at others' expense or that of the British royal family or other celebrities. Some potty humor: a dog urinates on a painting, a hippo makes gas bubbles in water, etc.

Alcoholic drinks (like Scotch) are very occasionally mentioned by name.